The brief was to create an outfit for an Indian cocktail party.

END_OF_DOCUMENT_TOKEN_TO_BE_REPLACED

The Asian Destination has joined forces with Feed You Fashion to calm your Fashion Week withdrawal symptoms. This fashion webzine aims to “inspire, update and parley”. Stylish and sophisticated, Feed You Fashion is definitely a site worth following.

In this guest post Lucy, founder of Feed You Fashion, reveals the Indian cultural influence behind two beautiful S/S’14 collections.

THE ART OF FASHION

Let’s assume for a second that all designers lived under one roof – a big brother house situation, if you will! Sure, based on new conversation their designs would begin as deductions from curious encounters but with time, and a lack of interaction with the outside world, such enthusiasm and spirit would falter. This is purely because fashion breathes through creativity. Innovation is accumulated through experiences and the ways in which these experiences are interpreted are based on our culture.

Fashion Week is a prime example of such diversity, an assortment of backgrounds and cultures, which is what allows designers to create such contrasting fashions.If you look close enough, these origins seep through the seams.

It’s September. It’s time to welcome a flood of fashion, as we take on this month dedicated to our sartorial needs.

New York Fashion Week has previously introduced us to two Indian designers – Naeema Khan and Bibhu Mohapatra. Khan launched his label in 2003 and Mohapatra, having resigned as Design Director of J. Mendel in 2008, went on to launch his own brand under his name. The latter’s designs showing fewer connections to his Indian roots, which may be due to his years spent at the French fashion house.

The S/S ’14 woman of Naeem Khan is all about elegant femininity.

Hemlines happily follow few rules, ranging from floor skimming to thigh skimming and setting a liberating example for shape. The common denominator being a cinched waistline to gracefully celebrate the female form. The Khan woman is a romantic, yet proves she does not fear the borders of her comfort zone as reserved silhouettes are made daring by descending necklines, thigh high slits, chiffon and open backs.

Perhaps most notable of the collection is the patterning; if garments are not lavished from seam to seam in elaborate prints, then such designs creep across dresses from various angles. The print heavily reminiscent of traditional Indian henna – the intricate patterning typically used during Hindu weddings and festivals.

The story is in the print.

For Bibhu Mohapatra, the S/S ’14 woman is much more angular with an air of modernist chic surrounding her.

3D flowers act as the cherry on this sartorial cake, either creating shoulder armour, fanning across waistlines or concealing cardigans. Where buds and sequins did not appear, mini peplums and micro pleats were on hand to make up for the missing texture. Not to mention, the thick dress straps, which left little shoulder or décolletage visible in order to cement their presence. The Mohapatra woman is sophisticated and concise, teaming her pencil thin skirts to her leather jackets.

The delicate hues and feminine patterning of the collection hint at romanticism, however every angle reeks of opposition. 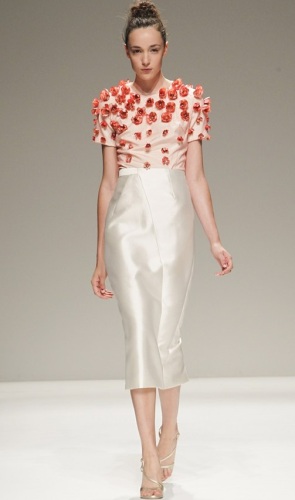 Our Posts By Date

Previously on The Asian Destination…